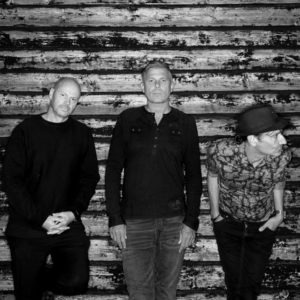 3D an exciting new musical concept bringing together the musical talents of iconic DJs/Producers Danny Howells, Darren Emerson and Dave Seaman, bringing together decades’ worth of experience in the electronic music realm. 3D is a musical creative project born out of a desire to challenge the modern narrative of a dance music show offering an insight into the world of these three revered DJs and producers as they elevate their craft to another level.

Initially launched in 2017 3D have taken their showpiece performance on tour around the globe to critical acclaim. Their performance style is deeply rooted in spontaneity and sonic curiosity, as each artist brings his own distinct touch to the stage, delivering only the best in deep house, tech house, techno and everything in between in to one massive combined DJ performance more than just a regular B2B set.

Still, to truly understand the wide-spanning scope of 3D, one need only dive into the accomplished history of each individual member.

With over 20 years’ experience, Danny Howells has built a legacy for himself via his broad musical tastes and impeccable ear. Danny has held residencies at world-class venues like Arc, Ministry of Sound, Twilo, Renaissance, The End and Bedrock. He’s best known for his numerous acclaimed mix albums, which include multiple contributions to the Global Underground series and his three-part ‘Nocturnal Frequencies’ series for Obsessive, as well as his revered Dig Deeper imprint, which has grown to international recognition since launching in 2008.

As one of the original founding members of legendary electronic act Underworld, Darren Emerson has remained a true innovator for more than 30 years. His pivotal Underworld classics, including ‘dubnobasswithmyheadman’ and ‘Born Slippy’, still serve as the genre-defining releases of the ‘90s electronica boom. He’s since continued to push electronic music to new dimensions via his dual imprints, Underwater and Detone, as well as his collaborations with and remixes for Depeche Mode, Björk and The Chemical Brothers, to name but a few. With releases on Carl Cox’s Intec and John Digweed’s Bedrock records Darren is still a producer very much in demand. This year will also see the relaunch of his iconic Underwater label.

With a career spanning over almost three decades, Dave Seaman has helped create and curate the future of electronic music. A former editor of Mixmag, he’s also the man behind era-defining labels Stress and Audio Therapy, in addition to his countless mix compilations for the Global Underground and Renaissance Masters series. He’s also collaborated with and remixed some of the world’s elite artists including Pet Shop Boys, David Bowie, New Order, Sasha and Underworld. Dave’s latest venture, Selador Recordings continues to flourish, having already notched up label showcases at the likes of Watergate Berlin and Space Ibiza.

2019 sees 3D hitting the road for their forthcoming South America tour, taking in some of the coolest venues and festivals in the region, additionally catch them as they appear at Latitude Festival in the UK. As well as on their forthcoming Asia and US tours

As ever, Danny Howells, Darren Emerson and Dave Seaman stand at the vanguard of electronic music. 3D is the culmination of all their years combined into one revolutionary sound.