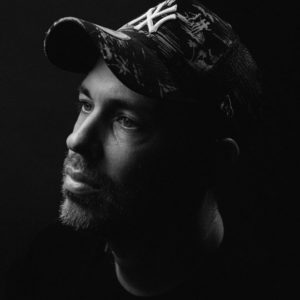 It’s fair to say that Serge Santiago had a mighty fine musical schooling. As a resident of the seminal Brighton club night Stompaphunk he learnt how to work a dance floor as DJ. He took those skills into the studio and taught himself how to make records that always work on a dance floor from the underground to the charts, through House, Disco, Italo and Techno. Twenty years on from those heady days he’s only getting better at it.

He cut his teeth int he studio making edits for the Stompaphunk dance floor under the name Radio Slave with Matt Edwards – chopping up early naughties pop & R’n’B tracks into underground bangers – Kylie, Justin Timberlake & 50 Cent and many others all got put though this pioneering process.

Serge soon branched out on and started concentrating on making his own music, releasing tracks on Stompaphunk Music and his own label Acrobaleno – the first release was with the epic Atto D’Amore. A record that has had a quite extraordinary life, nearly 15 years on it still lingers in the boxes of many DJs…

He still couldn’t resist an edit though and his series of coloured 12” re-edits of Italo influenced coloured EP’s rocked parties across the world, as did Serge as his DJ reputation spread. This in turn led to collaborations with others DJ’s and producers, most notably with Tom Neville. As Retro/Grade they released the track Moda an exceptional slab of techno that caused dance floor meltdowns across the universe.
This is another record that has amazing longevity and is being played by a new generation of DJ’s who are discovering its awesome power for the first time.

Around 2012 another collaborative project started to make waves. Waze & Odyssey with Firas Waez went on a highly prolific run of outstanding underground records that caught the zeitgeist and ended up at the top of the charts with Bump & Grind in 2014. A string of club hits followed along with DJ dates around the world. But Serge, as always, had his eye on the next phase of his musical career and started thinking about his solo work as Serge Santiago.

By a strange twist of fate Damian Harris, founder of Brighton’s Skint Records returned to the label, as a long term friend and fan of Atto D’Amore he wanted to sign the track to help define the ethos of Skint 2.0. He was also keen for Serge to join the gang and make him some new tracks. The timing couldn’t have been more perfect and sparked another wave of creativity and dance floor excellence… Atto D’Amore has some excellent new remixes on the way and the worlds biggest DJ’s are pestering him for his new tunes.